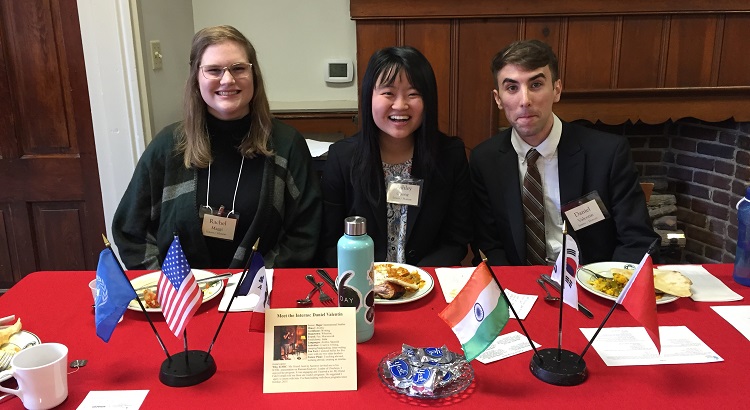 International Studies is one of the academic units in the Division of Interdisciplinary Programs.

Importance of interdisciplinarity, global perspectives, and world language study for 21st-century liberal education; intentional planning of courses and other out-of-class experiences to prepare students for life and career after college.

IS:2000 Introduction to International Studies 3 s.h.

Cross-cultural skills and ethics for international business, education, and service.

Current events that introduce students to political and cultural developments throughout the world. GE: Diversity and Inclusion.

Exploration of expressions and experiences of Muslims in increasingly diverse societies around the world. Same as ASIA:2041, RELS:2041.

World history from the late 1400s to 1945; colonialism, imperialism, capitalism, and industrialization as forces of global social and cultural transformation. Same as HIST:2122.

IS:2151 Global Migration in the Contemporary World 3 s.h.

Examination of social, economic, and cultural dimensions of global migration in the contemporary world from a transnational and anthropological perspective; primary focus is on Asian migration to the United States, but in comparison to other migration trajectories. Recommendations: an introductory course in cultural anthropology is useful, but not required. GE: Diversity and Inclusion. Same as ANTH:2151, GWSS:2151.

Recent debates over legalizing gay marriage remind us that the law is not an abstract concept, it is a social creation that emphasizes certain cultural norms over others, both powerful and changeable; family law outlines what one cultural vision of relationships—those between lovers, parent and child, and between kin—supposedly should look like in a given society, a vision always marked by gendered, racial, and sexual divisions of power; students consider what happens when legal norms intersect with diverse ways that people make families through topics including marriage, divorce, custody, and surrogacy across the world. Same as ANTH:2190, GWSS:2190.

IS:2248 The Invention of Writing: From Cuneiform to Computers 3 s.h.

Invention of writing as one of the most momentous events in the history of human civilizations; how the use of written sign systems, notations, maps, graphs, encryptions, and most recently, computer programs have consequences that reach deeply into all aspects of people's lives; how writing fascinates and delights, fosters reflexive thinking and facilitates development of complex societies, and gives rise to institutions of social power and control; students explore the invention of writing and its consequences in broad international and interdisciplinary context. Taught in English. Same as ANTH:2248, ASIA:2248, CL:2248, CLSA:2048, COMM:2248, GRMN:2248, HIST:2148, LING:2248, TRNS:2248, WLLC:2248.

Information on international job sectors; presentations by experts in the field; advice on what is required to work internationally.

Introduction to lives of Muslim immigrants in the USA, France, Germany, and England; examination of various theories on multiculturalism. Taught in English. GE: Values and Culture. Same as GRMN:2655.

Introduction to provision of service to a community in a less-developed country; development of discipline-specific projects aimed at improving community life in Xicotepec, Mexico in collaboration with Rotary International; cultural and professional preparation for teamwork in an international environment; service-learning course requiring travel to Xicotepec, Mexico during spring break.

How to do research related to international and global topics; preparation for a local or international project which addresses international issues in a systematic way. Requirements: junior or higher standing.

Writing project completed with the supervision of an approved faculty mentor.

Communication as a vital component for any effort to create social change; necessary communication to reach out to target audiences—people and communities in need—from campaigns persuading communities to change knowledge, attitudes, and practices to aiding other development efforts in areas of health, education, rural development, or sustainable agricultural practices; importance of communication as an integral part to any effort aimed at creating large-scale social change. Same as JMC:3116.

Individuals and groups use social media to organize, collaborate, and spread their messages to local and global audiences; students explore the myriad ways that people and organizations use social media as tools for civic engagement, activism, and political participation; drawing on a broad range of international and national cases, students examine unfolding social movements from early internet activism to the present. Same as JMC:3142.

Economies as cultural systems that emphasize the role of worldviews and "meaning-making" in organizing economies; debt as a key mechanism in creation and maintenance of relationships; focus on how exchange, distribution, and obligation serve to shore up or sever various social institutions and links between debt, inequality, and power; debt in various forms, from a round of drinks to student loans, and from the U.S. mortgage crisis to development aid; diverse array of economies—from gift exchange to ceremonial destruction of wealth, and from Melanesia to Wall Street—to evaluate assumptions that undergird different systems of debt and credit. Requirements: introductory course in anthropology or international studies or gender, women's, and sexuality studies. Same as ANTH:3190, SJUS:3190.

How global health has grown as an area of practice and study, with well-being and livelihoods of increasing numbers of people now deeply influenced by these ideas, practices, and policies; students engage with ways that global health programs have influenced experiences of health and illness by those who participate in these programs; critical analysis of how global health interacts with local dynamics of inequality, race, gender, and power. Same as ANTH:3199, GHS:3199.

Overview of development theory and debate; increasing role of China and other new players in development funding and projects; development-oriented projects, career paths.

Exploration of feminist perspectives from the United States and outside of the United States; how geopolitics shapes understanding of familiar feminist issues (e.g., reproduction, cultural practices, sexualities, poverty); emphasis on global south regions and populations. Same as ANTH:3125, GWSS:3350.

IS:3555 Understanding Health and Disease in Africa 3 s.h.

Understanding how food influences, and is influenced by, social, political, and cultural factors.

IS:3565 Global Perspectives on Negotiation, Persuasion, and Communication 3 s.h.

Cross-cultural approach to preparation for negotiation; exploration of how culture simultaneously enhances and complicates persuasive interactions at the individual, organizational, and global levels; evaluation and improvement of negotiation and cross-cultural communication skills through experiential in-class exercises.

IS:3600 Development in a Global Context I: Preparing for an Internship in Health, Gender, and Environment 2 s.h.

IS:3700 Development in a Global Context II: Reflections on Real World Interventions 1 s.h.

Examination of emerging human rights issues from an interdisciplinary and international perspective. Same as HRTS:3905.

The PDF will include content on the Courses tab only.